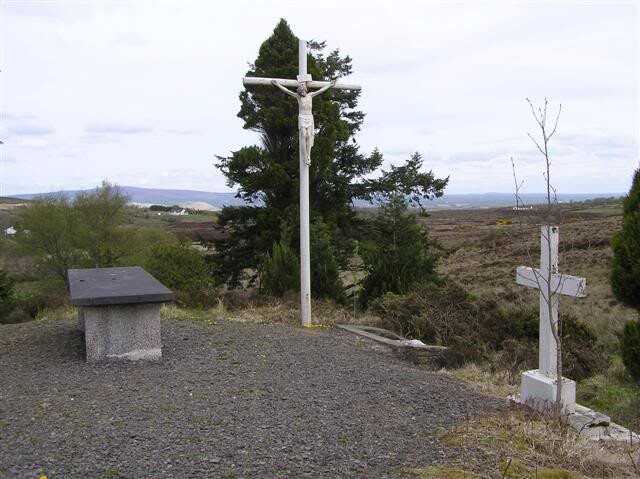 According to historians, Mass Rocks like this were on use from the middle of the 16th century onwards, long before the Penal Laws of the 18th century. So today we stand on ground hallowed over the centuries by the faith and prayer of men and women who sought to meet with God in holy places and at sacred times. Their story is part of how we have come to where we are today.

So what might we learn from being here today with this Gospel passage of the Goodf Samaritan?

Firstly, last week the diocesan pilgrimage was in Lourdes where we reflected on the strange story of Bernadette. She claimed to have seen a lady at a grotto on 17 occasions between February 11th and March 25th 1858. And then there was silence – until a final encounter on July 16th. We cannot know what would have sustained an illiterate girl through those difficult weeks. But perhaps it was what happened at the third meeting on February 18th. The unnamed lady asked her to come to the spot for 15 days – and she addressed Bernadette using the formal 'Vous', instead of the normal 'tu' that the young daughter of an impoverished and disgraced family expected.

Throughout the Bible, at the heart of any encounter with the God of mercy is a person being addressed with dignity and respect. Many people struggle to believe that they are worthy of respect. As we can see from the stories of Abraham, Moses, Jeremiah, Mary, Paul, the encounter with God of mercy may well involve unreasonable requests – but you are addressed by name. The divine call is always an invitation which respects who you are – and your right to choose. It means that it invites a response from you – as you are.

So the mercy that is talked about so much this year is an offer to you in the reality of your life. It is not an impersonal thing like a win from the National Lottery. It is an offer to know that you are loved by the God who made the billions of stars and who wants you to share his life! Thus mercy happens only in the context of a relationship with the God who takes you and your life seriously. The invitation in Jesus' time was to see sin, not as a barrier to God, but a door to God. We fear living with the truth – but only it will set you free. The God of Jesus is aware of where you have been – but the grace of the cross tells us that God is more concerned with what we can still become though his mercy.

Of course there are childish ways of responding to God. The childish heart thinks "I'll give God a few sweeteners. I'll go to Mass, put money in the plate, give to charity, go on a holy things. I have enough money/charm to bribe God to turn a blind eye. God isn't all that smart! I'll give him a few sins, slip him a few pound and that will keep him sweet." But he Lord invites us to have an adult heart, not to be playing childish games. Bible is about adult growth. It was childlike trust, not childish immaturity that brought people to this Mass Rock down through difficult times.

Secondly, that adult encounter with the 'balm of mercy' poured over your mistakes, sense of inadequacy, hurt at family, life and church, and disappointment at how things have worked out. But – as we from today's parable of the Good Samaritan, it then pushes us out to share that mercy to whoever we come across, beaten up on the road of life.

For the priest and Levite, other things are more important. For Jesus, nothing is more important for the medicine of mercy is intended primarily for the one in pain and need. That means the addict, the young hooligan and the irresponsible adult, and the person who are in pain themselves and infects other with the bitterness which gurgles inside them. The parable does not tell us who the injured man was. He could have been a business man or a local drug dealer, a respectable citizen or a gang member beaten up by his greedy pals.

For the Good Samaritan, mercy costs time, energy, money and maybe misunderstanding or criticism. 'Being moved with compassion' is a dangerous step. Mercy – paradoxically – is free but it comes at a cost!

Thirdly, our visit to this Mass Rock tells us that the challenge for the church of Jesus' disciples – in days of Mass rocks and in 2016 – is not how do we stretch priests further or how do we get priests of whatever nationality, gender or marital status to keep the status quo going? Rather the real question is how do we structure ourselves differently to make mercy visible and accessible in the new circumstances of lour day? The traditional way of being church is not handing on the faith as well as it should.

Mass Rock generations were preceded by monasteries and the medieval church. In changed circumstances they had to find new ways to maintain their faith in age of persecution. Much of that response was home-based and used sacred places/times as well as occasional mass at secret places. And that did not mean having 9.30 and 11.30 Mass each Sunday at this Mass Rock.

In an age of a highly educated laity, a mistrust of organisations, and a highly secularised culture, our real question today is how we need to reshape parishes, how clergy and laity work together and our understanding of church. The aim of changes is not the maintenance of current structures and relationships but seeking ways to ensure that, remaining faithful to Christ's teaching, we effectively hand on the Gospel to the next generation and be a church, where going to Mass makes people merciful to a fault, and never self-righteous to those whose lives are a mess.

What worked in 1950s does not work now. Those who walked the hard wet road to Corradinna will tell us not to be afraid of walking new hard roads. The challenges facing this generation are no harder than the ones they faced.

People here for various reasons. But maybe the main reason you are here is because God wants you to hear this Gospel so that you may develop a more adult understanding of your relationship with the God of mercy whom we see in Jesus, feel pushed beyond your comfort zone to be channel of peace in your own life and work to renew the church in the service of truth and healing.

Maybe the walk here has brought you, not the end of the journey but to a new beginning chapter in your own pilgrimage of faith in the footsteps of the God of mercy, whose face we see in the Jesus who tells us the parable of the Good Samaritan...