The Season of Creation - 1st September to 4th October 2021

Jul 22 Posted by Tony Brennan in Season of Creation

The Season of Creation or Creation Time, is marked throughout the Christian world from 1 September to 4 October (Feast of Saint Francis of Assisi) and celebrates the joy of creation as well as encouraging awareness-raising initiatives to protect the natural environment.

A message of hope from Bishop Donal in the Season of Creation last year.

A Home for All?: Restoring Our Common Home

2021 marks the 6th anniversary of Pope Francis' encyclical on the environment entitled Laudato Si': on Care for our Common Home.

This year, as in previous years, the Season of Creation will be celebrated from 1 September - 4 October. It is an opportunity to give thanks to God for the gift of creation, to explore with parishioners the rich content of Laudato Si' and decide on what actions should be taken locally to care for our common home.

The theme for the Season of Creation this year is "A Home for All?: Restoring Our Common Home".

Liturgical Resources for use during the Season of Creation are now available for downloading on the website of the Irish Episcopal Conference, www.catholicbishops.ie. They are made up as follows: 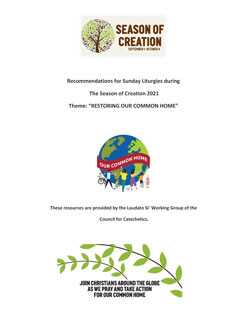 In addition to the Resources, you will also find, later in August, Podcasts on the website of the Irish Episcopal Conference relating to the Season of Creation.

After the Season of Creation there will be a meeting in October of world leaders in China for a UN Biodiversity Conference (known as COP 15) and another UN meeting on Climate Change in November of world leaders in Scotland on (known as COP 26). In preparation for these UN meetings there will be a petition known as the Healthy Planet, Healthy People Petition available at http://healthyplanetandpeople.org/ for dioceses, parishes, and individuals to sign. It is envisaged that this petition with signatures will be presented by Pope Francis to the Presidents of these upcoming UN conferences.

The Season of Creation, of course, should be celebrated in a way that adheres to the Government Guidelines concerning the Covid-19 crisis during 1 September - 4 October 2021.

Finally, you may wish to know that these Resources have been prepared by the Laudato Si' Working Group of the Council for Catechetics.I hope you will find them helpful and, of course, you should feel free to adapt them to suit the local circumstances of your parish(es) and school(s).

The following resources are offered for use in dioceses, parishes and in the home, during the Season of Creation 2021:


What is Laudato Si?

If your parish would like to know more about how you can help to care for our common home, please contact:
Patricia McCormack, Laudato Si Derry
Tel: 077 1190 0420 / +44 77 1190 0420
Email: laudatosiderry@gmail.com
Facebook: Laudatosiderry