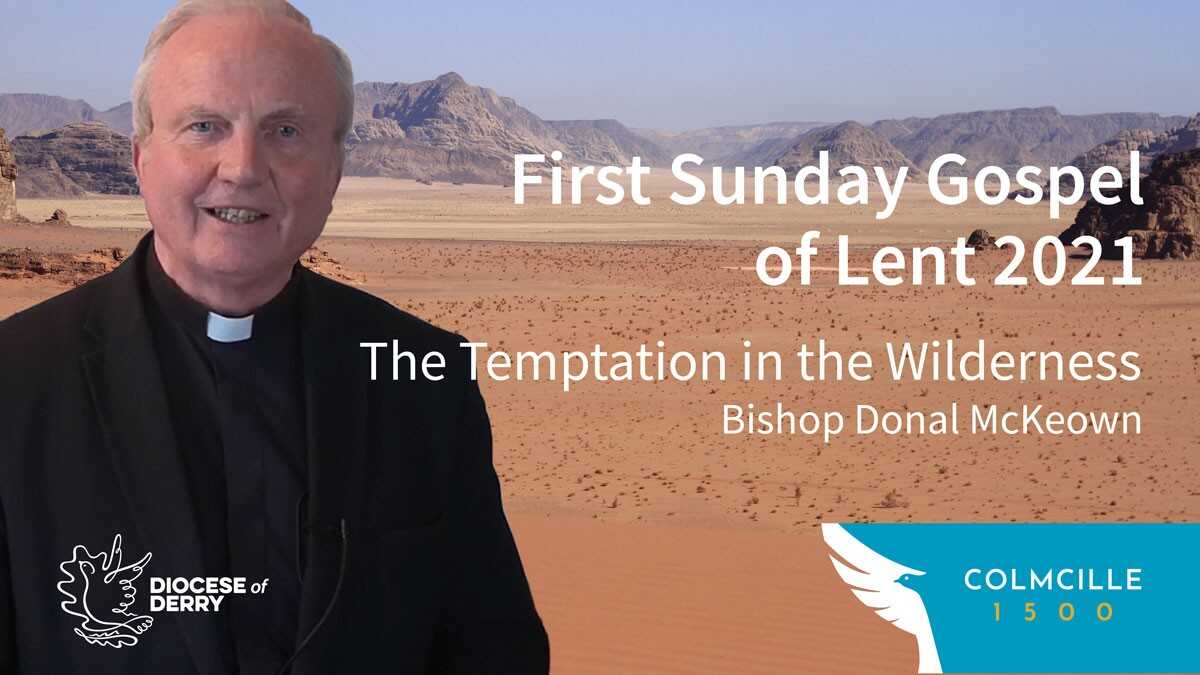 Lent comes as a bit of shock to the system. You might think that we had enough deprivations without Church going on about prayer, fasting and almsgiving! The absence of ashes this year places the emphasis on the Lenten season - and not just on getting the mark of Ash Wednesday. If Lent is only a smudge on the forehead, it is nothing. Today, the first Sunday of Lent, we are faced with Jesus' temptations, which occur immediately after his baptism at age 30. As ever, the Gospels are clear about Jesus' teaching. What might we learn for today about our Lenten journey?

Firstly, we all know the reality of temptation to do something wrong or stupid. At the start of the Bible, the story of Eve and Adam in the Garden of Eden shows that the "I'm worth it" slogan touches something primordial in human nature. It focuses on me as the measure of good and evil. Temptation to do wrong has been there from the beginning and is part of the price we pay for human freedom.

Even Jesus is tempted to sell short his mission to take up the cross. St Mark's account talks about Jesus with 'wild beasts' and 'angels'. Temptation is subtle and powerful. Ask anyone who is struggling with attraction to substance abuse or to pornography or to buying things that they will never use. There is power in phrases such as 'just a little won't do any harm', 'you deserve it', 'you make up your own mind'. In a world of much poverty, retail therapy is sold as a remedy for my pain. When Cain is tempted to kill his brother Abel, God says to him Sin is like a wild beast, hungering for you, which you must master. (Gn4:7). Sin can be like a dog barking incessantly at the door, trying to get in. Temptation is real. The angels can seem much less attractive. We are all capable of giving power to the wild beast within us.

We live in a culture where there is a huge tendency to corrupt young people as soon as possible. Tell them that it is wrong to keep out the wild beast that is hungering for them. Seduce them with self-indulgence and 'anything goes' sexuality very early - and the market has them for life. Knock the idealism out of them and they will be prisoners to consumption all their lives. Tell them that this is how 'normal people' behave and they won't know what is normal. Sin wants to destroy my self-respect and respect for others. Lent talks about temptation and the hidden persuaders. As a society, we are very stupid if we don't.

Secondly, the story of Jesus in the wilderness tells us that dealing with temptation is not easy. When talking about this, religious teaching portrays the devil as a person. That is because all temptation is personal. It is about me and how I see myself. Jesus is tempted in a sustained manner to be unfaithful to his personal identity and calling. He is plagued for forty days by the insidious voice that tells him there is an easier way. He is encouraged not to fight evil as God wants, but to protect himself from the Cross that fighting evil will involve.

The devil wants to protect his business model. He wants to tell me that all my hungers are good. But there is a big difference between my wants and my needs. What an addict wants is the last thing they need. What a sexual abuser wants is the last thing that anybody needs. Maturity means knowing what your weak points are. Know those weak points – because the devil does. Lent is about facing the weaknesses in my defence and doing what I humanly can to bolster them. Lent is intensely humanising and maturing because God insists that I am not a slave to the wild beasts within me. The story of Noah and the Ark speaks of a God who wants to save us from our abuse of freedom. And we all know the damage that we do to our society and environment by irresponsible behaviour. We waste so many God-given gifts and say that we can do nothing about it. Too many children suffer because adults are encouraged to stay childish and to place the exercise of their freedom above their responsibilities to others. Coping with temptation is not easy.

Thirdly, our faith teaches that Jesus faced temptation at the beginning of his public life and that he faced the force of sin on the Cross – even though he was innocent. But it says that Jesus has broken the chain that holds us prisoners. Everything has been subjected to him. The empire of the devil's business model is no longer in control. We have been washed in the waters of baptism and offered a pledge of eternal life, based on the victorious Risen life of Jesus. Our sacramental treasury tells us that not just our spirits but also our bodies will be raised up. Our eternal destiny depends on whether we try to make space for powerful divine grace. But God will not intrude without our consent. Lent is a call to decide whose side we are on.

This Lent, as we look forward to coming out of lockdowns, as people of faith we are challenged to not sell yourselves short with excuses like 'I couldn't do that' or 'that would be too hard'. The pandemic has broken our link with many practices. We don't have to go back to the old ways just because somebody else wants us to. This Lent is not just a time to do penance for six weeks. During it we can hear the divine challenge to believe in the liberating possibility of self-discipline, a prayerful openness to God's gentle voice and a generous spirit that thinks about the welfare of others and not just my own narrow little nest. The devil does not want us to dream about breaking away from his control.

But today as in every generation, Jesus proclaims the Good News that the Kingdom of God is close at hand. Repentance means knowing where we have succumbed to the weakest part of our defences – and allowing God's forgiving grace to heal us. For Jesus, fighting evil meant resisting temptation and taking up the Cross. Prayer, fasting and almsgiving focus on all of our relationships – with God, with self and with others. Piety without practical generosity is a hollow form of discipleship. Lent challenges us to a holy and wholesome faith – not to one that is riddled with holes. If we are prepared to walk with him through Lent and carry the Cross with him, we will inherit what is promised in the new covenant sealed in his blood on Calvary. That is a much better bargain than the bum deal which the devil offers!