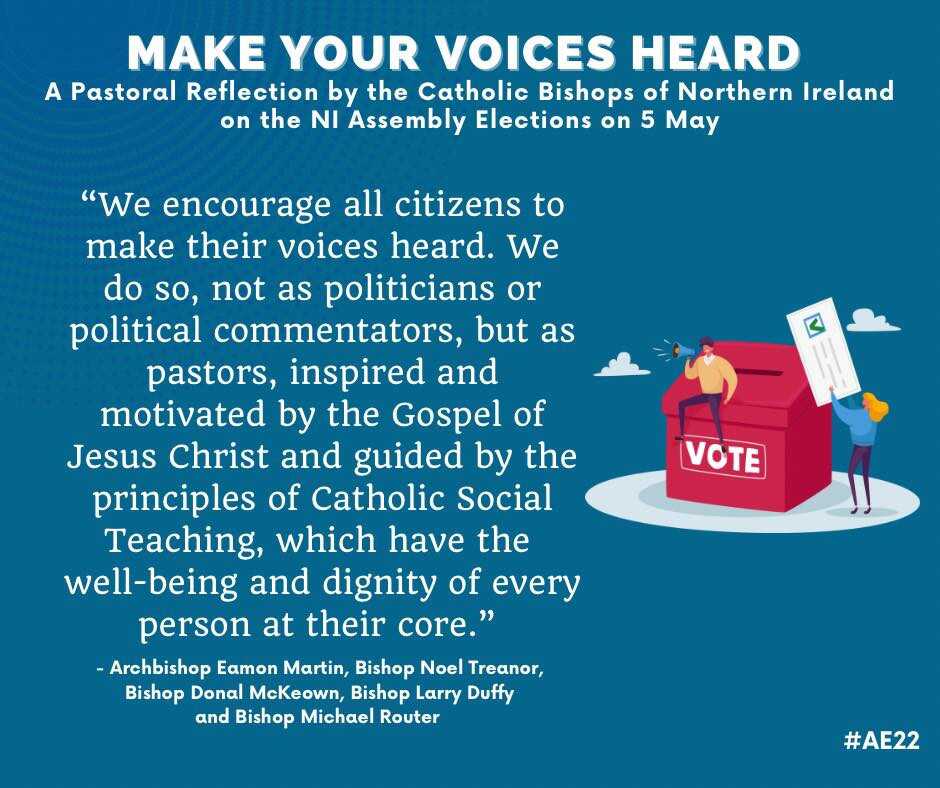 Politics, lived with integrity, and in a true spirit of service to the common good, is a noble vocation. The freedom to vote is a hard won and precious freedom. For Christians it is also part of our call to shape society in accordance with God's plan for human dignity, freedom and happiness.

In this short statement, we offer some reflections on the importance of voting in the forthcoming Assembly election in Northern Ireland. We encourage all citizens to make their voices heard. We do so, not as politicians or political commentators, but as pastors, inspired and motivated by the Gospel of Jesus Christ and guided by the principles of Catholic Social teaching, which have the well-being and dignity of every person at their core.

The responsibility of politics is to develop laws and policies that serve, protect and promote human dignity and the common good, in the particular circumstances of the society in which we live. We do not seek to endorse any political party or candidate. The hard work of weighing up who to vote for lies with each individual before God and in the privacy and primacy of their own conscience. We urge people to come out and vote, even though some are expressing a lack of confidence in the ability of politics to deliver meaningful change.

Poverty: an afront to our human dignity.

Poverty - the inability to meet our basic needs, especially those of our children, the elderly and those with disabilities, and to enjoy a reasonable standard of life - is an afront to human dignity. The consistent failure of our local Assembly and successive Westminster Governments to radically and fundamentally change the dynamics of poverty and social inequality in our society is a huge indictment on the priorities chosen by those elected to serve the common good.

Notwithstanding welcome improvements in levels of employment in recent years, wage levels here still rank among the lowest on these islands and the gap between the richest and the poorest continues to increase. The constitutional issue, while important, has dominated our local politics to a degree that routinely undermines political stability and prevents the full economic, social and human development of our society.

The urgent need to address our unacceptable levels of poverty, social inequality and the deepening crisis over the cost of living ought to be a fundamental issue for a follower of Jesus in the forthcoming election. While the constitutional issue, including resolving problems of implementing the NI Protocol, and preparing for a possible future border poll, have important implications for economics and identity, this cannot continue to supersede the urgent need to address the ever deepening crises of poverty, inadequate access to health services, housing insecurity and the need for a reasonable standard of living in our society. People's lives and well-being are at risk. This should be a key priority and an urgent concern for all our politicians.

Life is precious: equal dignity for all, including the unborn.

We say to all voters: make your voice heard. Make your vote count. Speak up clearly and unequivocally for the rights and urgent needs of the most vulnerable in our society. This includes the rights and dignity of unborn children which are being increasingly relegated - culturally, politically and legally - to the realm of the worthless and sub-human.

We are very fortunate to live in an age when awareness of the preciousness of all forms of life and of every species on our planet is growing. We are more aware than ever that the intricate and interdependent systems of life on the earth, even in their most microscopic forms, need our constant care, respect and protection. All, that is, except unborn children in the womb!

In an inexplicable medical, scientific and cultural contradiction, so many of our local politicians seem willing to disregard the rights of our children in the earliest stages of their development before birth, while at the same time properly and stridently defending the rights of animals, plants, trees and rivers. In a similarly bizarre twist of logic, many who stridently proclaim their commitment to equality for all are, at the same time, quite content to support legislation that would discriminate against children in the womb, even directly targeting those with disabilities, and denying them the very right to be born.

We ask all voters to consider seriously the choice before them in this election - of supporting a loving, positive culture of life and care, or of further facilitating a culture that denies the very humanity and right to life of our unborn children, even directly targeting those with disabilities.

We believe it is possible to create a respectful and life-supporting environment for every person, at every stage and in every state of our lives. A culture of love and care that embraces all - especially the most vulnerable - offers the greatest hope for humanity and its future. Both mother and child in a crisis pregnancy have a right to a humane and life-affirming outcome for both. Rather than using medically destructive interventions to take away life, it is possible to build a loving and supportive society around every child in the womb, including those diagnosed with a disability.

We therefore encourage voters to make their voices heard by telling candidates on the doorsteps that they expect them, if elected, to work for the equal dignity of all, including the protection of all mothers and their unborn children.

A warm welcome to those in need.

Christians, and all people of goodwill, should seek to build a civilisation of love and care that promotes the well-being and progress of all. This culture of welcome and care includes an obligation to welcome those who are fleeing violent conflict, persecution, famine or other tragic human situations, including the increasingly irreversible consequences of climate change.

Since Brexit, ongoing changes to immigration laws and benefits processes are making the situation of migrants here increasingly difficult. Similarly, in contrast to the generous and welcoming response of the European Union, the so-called 'Homes for Ukraine' scheme recently introduced by the Westminster Government is proving too difficult to access and is so far failing to provide an effective response to the urgent needs of refugees fleeing the war in Ukraine.

Yet, the difficulties being experienced by Ukrainian refugees and migrants in general, is receiving little comment or attention from our local politicians.

We appeal for urgent cross-border cooperation on the island of Ireland to address the plight of Ukrainian refugees. We ask all those seeking election to the NI Assembly to pledge their support for ending the increasingly hostile policies and processes that are making our society a less welcoming place for migrants.

Building a culture of care for each other and for our common home.

Welcoming the stranger, protecting and nurturing human life in all its stages, these are fundamental values of the Christian faith. They extend also to our duty of care for the earth itself - our common home. As Pope Francis once put it, "A Christian who doesn't safeguard creation, who doesn't make it flourish, is a Christian who isn't concerned with God's work, that work born of God's love for us."

As he also pointed out, '"The earth, our home, is beginning to look more and more like an immense pile of filth… We received this world as an inheritance from past generations, but also as a loan from future generations, to whom we will have to return it!"

There is an urgent need to meet the commitments made at the Glasgow COP 26 Conference last November. This includes reviewing immediately our use of fossil fuels and developing more sustainable modes of agricultural, industrial and economic activity. These are important issues to be considered while weighing our Christian conscience in preparation for voting in the forthcoming election. In Ireland, we have the privilege of living in a particularly rich and beautiful natural environment. Ensuring this rich heritage is protected now and for future generations is a fundamental responsibility of every politician in their service of the common good.

Respect for religious freedom and for faith in the public square.

Those who stand for political office deserve our respect. Their role is often a difficult and challenging one and increasingly undermined by vile and highly personalised attacks, often from anonymous persons.

Those in public life are called to model respectful and constructive debate, and to demonstrate high standards of tolerance, inclusion and respect in public discourse and policy making.

Increasingly, those of religious faith and conviction can find themselves marginalised, excluded or treated differently from other groups in society. The idea that politics should be 'neutral' and 'does not do religion' is itself a concept that implicitly denigrates the right to hold and live by one's religious convictions. Among the ways it manifests itself is in the view that, to be a truly tolerant and inclusive society, we must 'liberate' ourselves from religious institutions, religious identity and religious belief. As leaders in the Catholic faith we see this reflected, for example, in the erroneous charge that Catholic schools are divisive, or are somehow to blame for the violent conflict that pervaded our society. Similarly, it is suggested that a politician, or other public figure, with a religious faith, should never allow that faith to influence their approach to policy and legislation.

We encourage politicians and voters to support a truly diverse and tolerant political culture, and to challenge the trend towards a culture that claims to be secular but is in fact intolerant and increasingly hostile to religious faith and its right to offer a respected voice in the public square. Catholic and other faith-based schools contribute actively to reconciliation and the common good. They have the right to be treated equally and with respect.

To address these issues effectively and urgently, our society requires a stable and effective Government. The absence of a functioning Executive has profoundly negative consequences for the most vulnerable in our society. A prolonged absence of the Assembly after the election would serve to destabilise society and disenfranchise many voters. Political stability and a functioning Executive will maximise social cohesion, provide the most fertile ground for economic prosperity and offer the greatest defence against those who would seek to manipulate a failure of politics for alternative means. A functioning and stable Executive and Assembly will provide the most stable space to work through the important issues of reconciliation, legacy and our constitutional future.

We remain convinced that human dignity and the common good of our society are best served by a commitment to the stability of our locally devolved institutions. We encourage all citizens to work to restore and help build a better future for all by making their voices heard in the forthcoming Assembly election.

WALK WITH ME - Parish Leadership Youth Ministry Me...
The Net - April 2022
Load More