Sr Nathalie Becquart in discussion with the Net Youth Writers 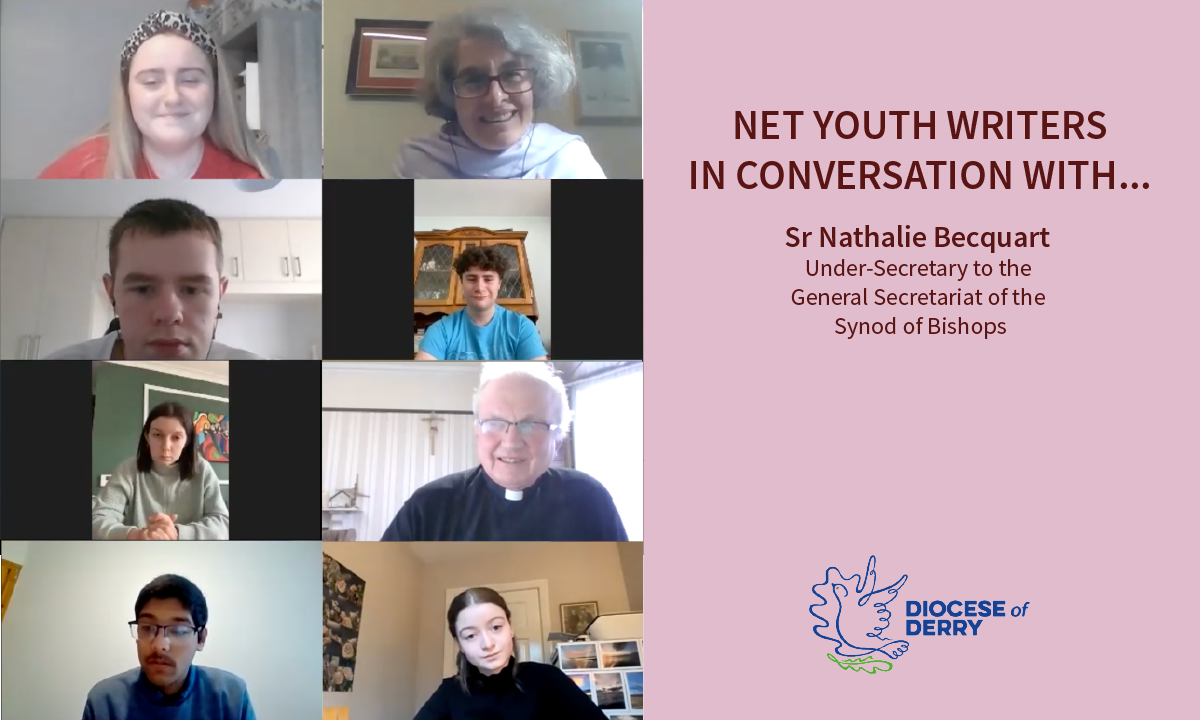 Hollie, Peter, Oisin, Gemma, Zara and John, 'The Net' youth contributors from the Co Tyrone, Inishowen, Co Derry and Derry City Deaneries, share their recent Zoom interview with Sr Nathalie Becquart, of the French Congregation of Xavieres, who has been appointed by Pope Francis as the first female Under-Secretary to the General Secretariat of the Synod of Bishops in Rome.


Bridging the gap between generations

Treasuring the memory of interviewing Sr Nathalie Becquart, the first woman appointed as Under-secretary of the Synod of Bishops by Pope Francis, Hollie is looking forward to the synodal Church...

I first met Sr Nathalie via Zoom at the October 2020 book launch by Veritas of 'Exploring Christus Vivit', which was inspired by Pope Francis' post-synodal Apostolic Exhortation, 'Christus Vivit'.

Published in March 2019, 'Christus Vivit' is a fruit of the 2018 Synod of 'Young People, Faith and Vocational Discernment', which Sr Nathalie had attended, and it is a personal favourite of mine. On February 6, 2021, the Vatican announced Pope Francis' appointment of Sr Nathalie Becquart to the position of Under-Secretary to the General Secretariat of the Synod of Bishops. Significantly, in the Church's history, never was there before a woman who was called to this position, and on a wider scale, there has never before been a woman to hold such a high position in the Church.Additionally, Sr Nathalie's new position grants her full voting rights in the Synod, which is momentous and will have a profound impact on the future of the Church. It is a pivotal point in the Church's mission, and it gives a clear reflection of the Holy Father's intentions to increase the role and involvement of women in the Church, which is both positive and promising.

Following up on the Vatican's announcement, I was speaking about this wonderful news to the editor of 'The Net', who told me that she was going to enquire about the possibility of The Net's young writers getting an opportunity to interview Sr Nathalie. To my astonishment, that actually happened! It was such an exciting and an amazing opportunity that I will be forever grateful for, and most definitely will never forget.

I focused particularly on asking Sr Nathalie a couple of questions regarding youth in a synodal Church, 'walking together' with the older generations. It was on March 19, the Feast of St Joseph, that The Net's young writers from the four deaneries of the Derry Diocese interviewed Sr Nathalie, accompanied by Bishop Donal McKeown, Mary O'Donnell, the editor of The Net, and Diocesan pastoral co-ordinator, Tony Brennan. Celebrating the Feast of St Joseph, we opened our interview with a prayer and began our conversation by delving into Sr Nathalie's roots, asking her "What was life like as a teenager whenever you had to make important decisions and choices in life that could shape your future?"

Interestingly, Sr Nathalie shared with us an opportunity she had as a Catholic Girl Guide to help organise a summer camp that would take place in Ireland. At almost 15 years of age, Sr Nathalie had an obvious interest in travelling and pilgrimage, which mirrors the concept of synodality that she is promoting today in her new role. The seeds of Sr Nathalie's vocation had already been clearly planted and were blossoming.In relation to her experience of working with young people for over 30 years, Sr Nathalie was asked about her favourite aspect of working in these roles and what she enjoyed most about events like World Youth Day. In her response, she mentioned that "a key point to be with young people is teamwork...we have fostered and implemented a model of co-responsibility."

In addition to this, in reference to 'Christus Vivit', Chapter 6, 'Young People with Roots', I asked Sr Nathalie, "How can we bring the young and old together to discern the way forward? Is there anything we can introduce to our parishes with the aim of encouraging intergenerational relationships?"

... to help this intergenerational dialogue, you need people who can be bridge-builders, who know both generations."

Interestingly, she acknowledged that "what is difficult nowadays is that intergenerational dialogue...is mainly like intercultural dialogue." In other words, we have to learn how to understand and communicate with others who are from culturally different backgrounds, in the same way, the young and old must try to understand each other from different eras. Sr Nathalie added: "I think, to help this intergenerational dialogue, you need people who can be bridge-builders, who know both generations."

My hope post-interview is that we can try to use Sr Nathalie's advice on 'bridging' the gap between generations by bringing them together on a common project, for example, a history and heritage project where the young and old together reach back to their roots. Lastly, when asked how she felt on being appointed as Under-Secretary to the General Secretariat of the Synod of Bishops, Sr Nathalie commented that "it was a great surprise" and that she "would never have imagined" that she would be in the position that she is in today.

View other reflections from the interview
Facebook Twitter
Homily - Retreat to remember Sr Clare Crockett - B...
Invitation to respond - Diocese of Derry Environme...