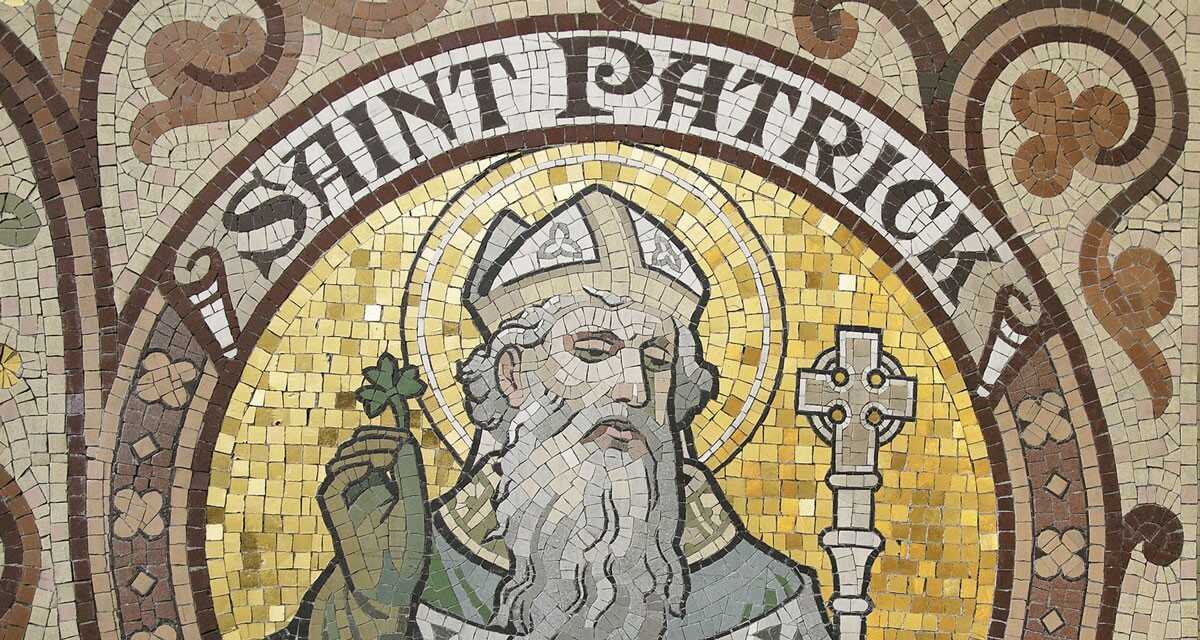 St Patrick's Day traditionally brings our great fervour and enthusiasm around the world. People don't have to be 100% pure blooded Irish to feel the urge to take part. And the celebrations can take forms that have a greater or lesser connection with the message that St Patrick stood for. Just as St Nicholas and his generous Christmas generosity have vanished into a saccharin Santa Claus, so too St Patrick has widely morphed into a figure that moves between being a large capricious leprechaun and a tipsy ginger-bearded buffoon.

Of course, in difficult times we need reasons to celebrate, to be together and to generate hope. And we do not have that option this year. I wonder what encouragement Patrick might give us about who and where we are at this critical time.

Firstly, there is a silent desperate yearning for something better than what is on offer, both North and South. There is much resentment at the level of public services, poverty, violence and a lack of direction. Political parties suggest new structures and they promise that they can deliver the necessary changes. But Patrick would say that he offered Good News and not just new structures that might look well on a drawing board or in an election slogan.

We read about him in his autobiography as coming to an Ireland that was dominated by a druidic religious system. He offered a different way of looking at people and the world. This new message challenged the orthodoxy of his time, even though such a criticism was rightly seen as a threat to the powerful of his day.

Today he would ask us to do the same. Yes, take the best of what our culture has to offer – and build on that. But do not be afraid to challenge the market ideology which says that we are capable of being nothing more that self-indulgent consumers, living for today and incapable of thinking about tomorrow or our children's tomorrow. Ireland will be renewed when we discover a new way of being and not just a new way of buying. We have to learn from the mistakes of the past. But that does not mean proposing a fantasy future that will simply end up repeating past errors and sacrificing children's welfare on the altar of the adult's right to choose.

Secondly, Patrick was a tough man who did what many would consider silly things. Having been a slave in Ireland, he accepted a divine call to return to this people who had oppressed him. He was able to write in his Confessions that I had to put up with insults from unbelievers. I heard my mission abused; I endured many persecutions. I gave up my free-born status for the good of others'. [1] But he gave his all, not to condemn people but to liberate them. He did not so much blame them for where they were, as tell them what they could become.

This tough spirituality is in stark contrast to what has been called the globalisation of superficiality. What happens on Love Island gets more coverage than what happens to Syrian refugees on the Greek islands. Self-denial, self-control and self-sacrifice are seen as unreasonable. Lent at best is only about my waist and not about my way of life. But that superficiality has created such a hollowness behind the façade of glamour. And the current medical crisis is pointing us to recognise that echoing emptiness. The strength of a culture is seen, not when things are going well but when crisis strikes.

In the face of a superficial culture, there is a temptation to dumb down the challenge of Jesus. It may seem simpler to domesticate the Gospel, with the mistaken view that this will make the Church more acceptable, less uncomfortable for this generation. It will not be easy for a society that has been promised bliss through 24/7 shopping and partying till you drop. The tough man Patrick would not want to be portrayed a feckless fool. He invites us to offer the challenge of Christ to today. Only there is life to be found. He was laughed at because he was considered a fool for Christ's sake. His descendants should be prepared for the same.

Thirdly, today's crisis is a challenge to who we are as a Church. Jesus faced temptations to take the easier way and he faced down the devil. He was self-sacrificing in the face of evil. Patrick's successors have often shown enormous courage in the Celtic monasteries, in facing persecution and in bringing help for mind and body as missionaries in far-flung countries.

Churches should remain open, priests highly visible in churches and communities and every possible use should be made of technology to reach lonely, frightened and self-isolating.

... In a time of trouble, people want to see 'God is love' in action. [Priests] Be visible, be available when everything else is closed. Walk with people and not away from them. Anything less from the Church of today will be a sign of a hollow spiritual life.

There may be the temptation for parishes to see the current lack of public Masses as almost a chance for a holiday. That would be a fatal betrayal of Christ, of Patrick and of God's people. This is a time for heroism and creativity. Churches should remain open, priests highly visible in churches and communities and every possible use should be made of technology to reach lonely, frightened and self-isolating. Some may well criticise initiatives that we take. We will get some things wrong. But the distress of many is another voice of the Irish, saying 'come and walk again among us.'[2] Clergy and parishes have to be visible walking among their people. Christ walked with those in need, whatever the personal cost. He faced evil in all its forms. St. Patrick was prepared to offer 'the living sacrifice of my life to Christ'.[3] Priests and parishes did phenomenal work here during the years of civil conflict and are rightly remembered for that. We have to witness to the power of the Cross and never to our fear of the cross. In a time of trouble, people want to see 'God is love' in action. Be visible, be available when everything else is closed. Walk with people and not away from them. Anything less from the Church of today will be a sign of a hollow spiritual life. I would rather be condemned for getting things wrong than for doing nothing, for fear of getting things wrong.

These are difficult weeks and months. On this national feast day, we can pray for God's grace to drive this evil from our shores.It is a time for intense prayer and penance. And we can also recommit ourselves to the Christ-centred heroism of St Patrick in the face of evil. That would be the best tribute to him on his feast day.